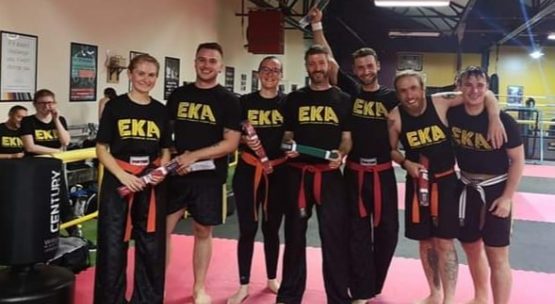 I would like to begin with this simple sound bite.

“Daniel: Miyagi. Hey, what kind of belt do you have?

There have been a number of times that I have been asked both inside the club and in my personal life, what the different colours of martial arts belts mean and why different clubs require changes to colours, some less and some more so.

These are all indeed good questions and one that has a lot of folk lore and myth around it. We may have all heard the one that in traditional martial arts a student begins with a white belt that becomes discoloured over the course of their training. This is of course a romanticised story, a nice one but merely a story.

The truth is the use of belts in order to show grade within a martial arts system is relatively modern, only coming about in the 20th century.2

Previous to this, marital arts teachers handed out certificates of ability to their student. It was the founder of modern judo, Kanō Jigorō (1860-1938)3 that we can thank for the belt system that we have today.

These belts themselves were a visual demonstration of the of the Kyu4 rankling in Japanese martial arts that sometimes, in my opinion make more sense. The reason that I say this is, the colour of most of the belts in martial arts can be fluid, most clubs will use white as a start and black is always the mark of an accomplished practioner of the art, but colours can move between. Kyu rankings give an idea immediately. These count down from a predetermine number and end at 1st Kyu, this is the step before 1st Dan or black belt.

It seems that from these first beginning in Judo the belting system has grown and grown, it denotes a level that you have attained and in often cases you have fought for. They are emblems of your success in your training. Therefore, it is my belief and that of the club (I know this for sure) that if you’ve earned a belt, you should be wearing it.

Numerous systems around the world have aped this kind of system in order to grade its practitioners and players, for example:

Further to this, you should never be afraid or intimidated by someone wearing a belt, you should never feel that their skill is so much in far advance of your own. I have had some blistering matches with white and yellow belts, I have also as a much junior belt bested black belts in competition. The adage of ‘It’s not the size of the dog in the fight, but the size of the fight in the dog’11 should be very much on your mind.

Moreover, the belt someone is wearing should be a bond that you are both pursuing the same goals in you training and that you should have respect for those you come into contact with (Shameless plug for my ‘Respect’ blog here), https://www.elemental-kickboxingleeds.co.uk/our-blog/the-11-rules-of-eka-our-code-of-conduct

Therefore, in closing, yes, a belt is a fairly modern invention in the field of martial arts, yes, it is a rank within the club that denotes a certain set of criteria met. But whether the belt is yellow, blue, orange white or black, there should be a joined respect amongst you all as martial artists who have gone through a similar journey together. For some this journey is long and arduous, for some this is a swift bounce up the gradings, but what is true is the devotion given.

Some may think that the journey ends with the award of the 1st dan, but from my perspective I can tell you that it does not. For me, earning my 1st dan was a realisation of a goal I had set myself long ago. It does not mark the end of a journey but the beginning of another. Where the kyu belts for me are about mastering skills, making your form flow and be useful, the dans are about passing on this knowledge and trying to advance the art as much as is possible. But like the belts and your journey between them, use them all as a learning experience and a chance to grow.