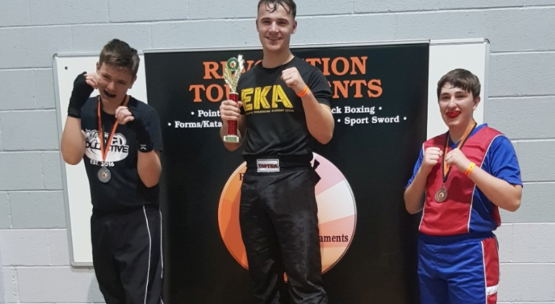 The beautiful setting of the Peak District was the home of the Revolution High Peak Championships on 08 September in the Chapel Leisure Centre. Team EKA was represented by:

When we registered Jude for the championships, we made the decision to stay over the night before and make a bit of weekend of it. In the meantime, my daughter Lorna, a former EKA member and green belt successfully completed a trial to join Leeds United U14s Girls Academy her first game being against Sheffield United on 07 September. Saturday morning was the start of a busy yet enjoyable weekend, we travelled to Sheffield to watch Lorna make her competitive debut then made our back to Leeds to collect Jude to head on to the Peak District. We had a fun afternoon and relaxing evening chatting and laughing. 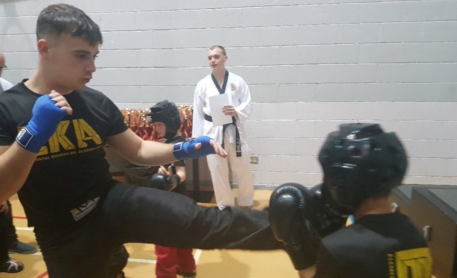 The morning of the championships was rather calm for us, as we chatted over breakfast and took our time, then my phone started buzzing, not everything was going so straight forward for the rest of the team. Jayne, Aaron’s mum had ordered some new gloves for him that didn’t arrive in time (thank-you to Tash for lending him hers) and then on the morning of the competition she came out to be greeted by a flat tyre which they got sorted but then hit road closures on the way down with a satnav sending them in circles and Lead Instructor, James had a poorly son, Ethan, to take care of and then took a wrong turn on the way down. Thankfully the diversions finally got them there and in plenty time and James made it in time for the action.

At the Leisure Centre, Aaron, Jude and Leon weighed in no problem. It’s then always difficult to estimate when the team might be fighting so I encouraged the guys to stay loose, do their stretching and some warm-ups on the focus pads. As often happens at these competitions you can go from taking a comfort break, warming up, sitting around, eating a snack, being chilled out to fighting two minutes later. Things went from being relaxed to frantic rather quickly as Aaron was called to his area followed by an announcement for Jude to go to his area with little warning. 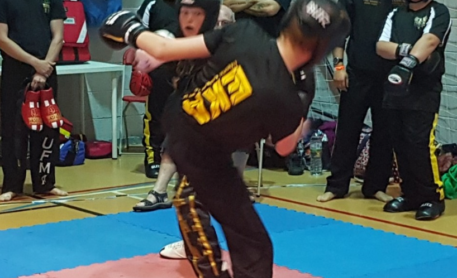 Aaron competed for the first time at the World Kickboxing Council Open European Championships in July enjoying the thrill of competing. He registered for both light continuous and points fighting, and that’s what was first up for Aaron. I was full of admiration for Aaron, who has no points fighting experience and we don’t focus on it at EKA, yet he wanted to test himself at a competition. Unfortunately, because Jude was competing at the same time, I missed both Aaron’s points fighting contents, but I have seen the video of his 3rd / 4th place fight. Aaron’s opponent started aggressively and steamed into a 5-0 lead however Aaron settled into the fight and found his rhythm trying to use his reach and scored 2 points with a kick to the body. The gap increased to 7-2 but Aaron never gave up and fought back with spirit to land cleanly twice in quick succession to take the score to 7-5. The fight ended 8-5 and Aaron showed a lot of heart to keep going, hopefully along with Tash he can inspire more members to compete in points fighting, it will make the trips to competitions more worthwhile and maybe add it as an option at future Fight Clubs. 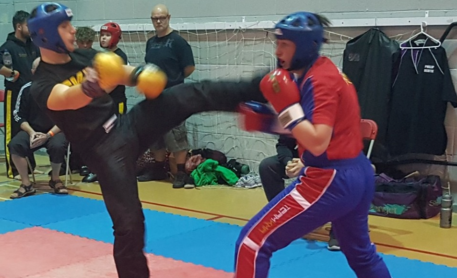 Following his K1 experience Jude came into this competition feeling more relaxed and confident but remaining focussed and grounded. Naturally the pre-fight nerves kicked in, but this certainly didn’t show in his fighting. In his first round, fight Jude started off feeling his opponent out, looking loose and composed. He then picked up the tempo blitzing his opponent with fast boxing combinations and throughout the fight Jude used his speed to evade and avoid strikes and landed well-timed front kicks and jabs to counter oncoming attacks to earn a, well deserved win. 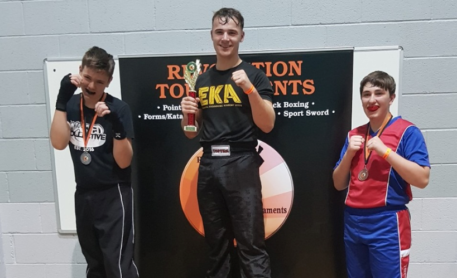 Jude’s opponent in the final was younger than him, he had stepped up in category and was very apprehensive about facing him and showed lots of courage taking on Jude. Before the final, Jude like a true gent chatted with his opponent and put him at ease promising to keep the fight light contact. True to his word Jude showed an incredible amount of control and respect, pressuring his opponent and landing strikes but keeping it very light to win the fight and become the Under 16s over 65kg Hight Peak Champion. Top stuff Jude! 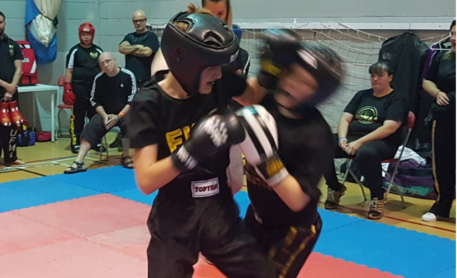 Aaron had the opportunity to get his own back on his Points Fighting opponent as they were matched up again for the Light Continuous under 12s 50 – 55kg. Aaron tried to force the tempo, throwing big kicks and applying pressure pushing his opponent off the mat a few times. However, his opponent stood strong and relaxed countering and landing some effective combinations which swayed the judges. This was only Aaron’s second competition and he is doing great, with more practice and experience a win will be just around the corner for him, well done! 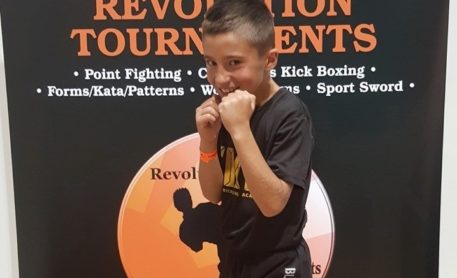 Leon was full of smiles leading up to his fight but when it was time, he certainly had the bit between his teeth on the front foot looking aggressive and landing combinations whilst holding a strong guard and staying loose. The judges ruled against Leon, his bigger opponent was able to absorb some of his strikes and use his size to overpower him at times. However, it was a real close bout, and the best I have seen Leon fight, he showed great improvement and fought more naturally, and it made for an entertaining very close fight. The smiles that we had before his fight returned to his face afterwards which was nice to see, great stuff Leon.

The day concluded for Team EKA with plenty of positives, Aaron fought three times, dived right into points fighting and gained more valuable Light Continuous experience, Leon showed great improvements pushing his opponent all the way which should give him plenty of confidence and Jude won his category meaning once again Team EKA come away from a competition with Silverware.

Well done guys, you all did great and you should be pleased with yourselves and we are all proud of you.