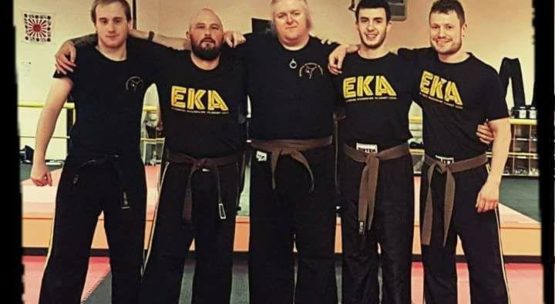 If my memory serves me correct, my first taste of Elemental Kickboxing was a rainy Tuesday night at Abbey Grange High School back in February 2012. My wife Tracey had (after much perseverance) finally convinced me to try out a martial art. “Learning a martial art would be fun” she enthused and I eventually relented and decided to take the plunge. Now to give this some context… I’d never tried anything like this previously and I was therefore a touch apprehensive about it. I seem to recall mentioning something along the lines of, “…if it’s full of meatheads I’m going home!”

Essentially I just wanted to get fit and hadn’t really thought about it past that. I grew
up with a love of the old kung-fu movies but never for a moment considered trying to recreate the moves for real! (That was for the pro’s/slightly unhinged…) Anyway, as it turned out, the session was brutally intense and great fun. More importantly though the people were great, approachable and helpful, (and still are) so I figured I’d try it out further and didn’t really give it much more thought than that. I certainly didn’t go into it thinking I’d cruise my way through the belts and become a kickboxing supremo. As the sessions rolled by, so did the belts and my confidence grew. I ended up getting all the kit and prepared myself for the grading’s ahead, loving this newly acquired skill!

However I’d be lying if I said that my journey to black belt was seamless and without
issue. The path to 1st Dan is a long, hard road and with each grading the pressure increases. I had doubts about my ability and level of fitness and felt both were well below what it should be and these doubts seem to manifest more and more and the grading’s got higher. My biggest dip came
around Brown 2/Senior Brown where, for various reasons or another I lost my motivation and if I’m honest, even considered taking a break for good. It’s easy to let that voice get in your head and it began to affect my performance and confidence. Everyone suffers these doubts though. The key is to buckle down and fight through the lulls. It’s easy to say but it’s true, and that fighting spirit needed is a key skill I’ve learned from the club. David & James, as well as my fellow 1st Dan’s helped me through it, however the camaraderie in the club helped hugely too.

Gaining the black belt is one of, if not my greatest personal achievement and I can’t really put into words how good it feels to have accomplished this. It’s the culmination of 5+ years of hard work, however it also feels like the beginning of the next stage. Did I ever imagine I’d be a 1st Dan kickboxer? Absolutely not! My only previous experience of martial arts before joining Elemental was via either Tekken or Street Fighter on the PS2 ;) I made it here though! Yet I feel I’ve only really scratched the surface with regards my knowledge and ability. What I’ve learned over the years and in particular the last year leading up to my 1st Dan grading is to believe in my ability. It’s a challenge, both physical and mental but ultimately one that is more than worth all the effort. I’m now looking towards 2nd Dan and can’t wait for the challenge ahead.

Thanks hugely to both David & James for their relentless motivation/beastings! It was
very much needed ;) Thanks too to my fellow 1st Dan’s Keith, Nathan & Dan (and not forgetting 2nd Dan Tobias!) I couldn’t have done this without you.

And a message to all those reading this who are almost there or just beginning their journey to first Dan. Don’t worry! Yes, it’s really hard work and will take all of your dedication & perseverance to see it through. However, if I can do it then you definitely can too ;)