Command your fight, start with your stance

Command your fight, start with your stance 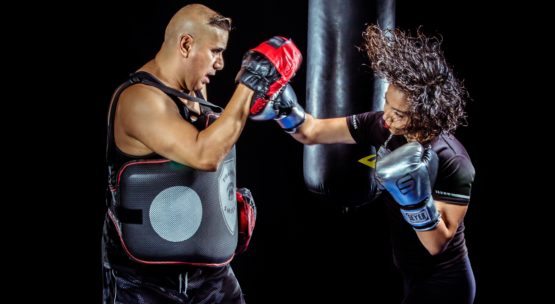 No, we are not dancing, or are we. This is a small illustrative example of the footwork used in some of the basic stances of Karate2.

The use of stance, or where you put your feet, is a very literal example of the foundations that prop up martial arts in general. Traditional systems place a lot of emphasis on this, as in the example above. Karate uses stances to give you the right angles to defend and to attack, where to place your feet in order to deliver certain techniques in the most efficient way possible.

How you place your feet and how you stand covers a lot of territory, including in this are things like:

There are many more involved in the body’s overall mechanics that could go into this, but I trust you get the idea.

An opponent’s stance should also tell you something about the fighter themselves, are they a puncher or a kicker, are they confident, what options do they have open to them for attack, what options for you have open to you. These all being our concerns in the world of martial arts.

But moreover, stance plays a massive role with human beings in general, this is intimated at where I have mentioned confidence. How someone holds their body in any situation can give insights to how they are feeling or what they are looking to do. Now don’t get me wrong, this isn’t s one size fits all and it is and exact science. But certain learning can be picked up, for example standing with your feet close together and parallel. This stance provides good posture, your feet are in alignment with your back and is often see how the way that a soldier would stand to attention. However, also imparted is that you are at your tallest, back straight, legs straight. It’s often adopted by reserved people who think before they act, making you seem wiser and more mature. This is of course all based on general observation and if everyone adopted it would make no difference.

Social analysis over with, let’s get back into our primary concern. Where does this leave us, as a kickboxing3 club that incorporates karate elements into its style and move sets. Well it leaves an interesting mix.

Traditionally, in karate the major thoughts are that you present as little target toward your opponent as possible. A side on stance, of which the benefits are: 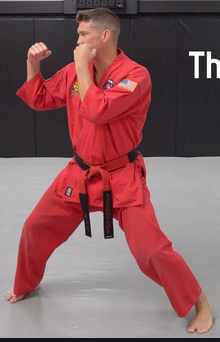 This stance can be varied as we see in the opening picture of this article. This change in foot work is to accommodate weight and balance for attacking and blocking. The use of foot work is incredibly important here, after all “If a man can’t stand, a man can’t fight…”4. Consider the change for a front leg roundhouse kick, the trailing leg becomes the post, the foot turns from a twelve o’clock position to three o’clock so that the foot can support the body’s weight. The torso is balanced over the grounded foot and the front led is flicked, toes flattened to strike with the, and here is the contention. So, karate documents three landing methods:

Ball of the foot: believed to be the most effective

Instep (the way we teach)5

These movements and strike points are different across martial arts, whether you practice Karate (multiple versions), Muay Thai6, Taekwondo7 and Wushu8

Each of these sports developed in different countries, adding their own spin on this. It can get really muddy when you start looking into pit.

So kickboxing, taking its cues from karate and western boxing, its origins have been also covered in another blog by Sam. Below is an image of kickboxing stance, notice the subtle differences. 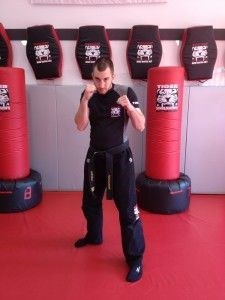 You can see how the boxing element is spoken to through the stance, though the feet are set, it allows the channeling of power up through the legs and hips into the fists. However, what you will notice is the target area is much larger.

Within the club I sometimes see even more square stances being used, presenting a much larger target, example as below. 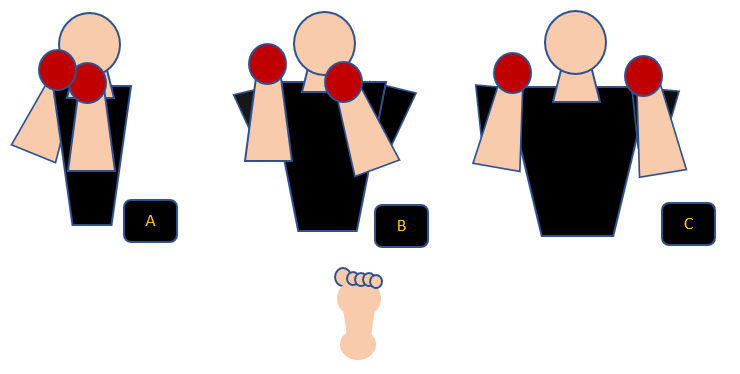 Now, yes, these diagrams are very simple and look like the man from the ‘Keep Britain Tidy’9 sign has had a shocker. But these are to illustrate a point. Here in these pictures we have the following:

A: How the body would look in a traditional Karate stance, to an opponent

B: How the body would look in a traditional Kickboxing stance, to an opponent

C: How the body looks sometimes when in sparring, to an opponent

Now you will notice I have also, tried, to draw a foot. You can imagine in your mind’s eye, if there in space in the example for that foot to get in. If that answer is many, then you are starting to understand.

But of course, this changes from person to person, due to the dimensions of that individual, but what should be constant is presenting a small target, whilst being effective ourselves.

Well as alluded to earlier, how does this translate into sparring or technique, how can we tell anything in what our opponent is doing. So, as we have gone through, he two traditional stances above, lets mark out what can be the options for us.

Karate Stance: As we have said this is traditionally very stable, the wide base makes it more difficult to sweep from the front foot, but the spinning sweep is very much open. The opponent will be looking to use the certain kicks as mentioned, but it will be more difficult to use front kick with both feet horizontal, unless they drop into an L Stance10. Also, the hand movement will be restricted, opting to use more backfist11 movements or indeed hammer fists11. The backhand is ready to pivot into the reverse punch, but this can be watched for. As traditional karate was a defensive system, often fighters are counter fighters and will wait for you to make the first move. These are all things to be aware of.

Kickboxing Stance: Set up in a more traditional boxers’ stance, this means you have to be ready for s barrage of boxing punches that karateka12 don’t necessarily use. The stance takes advantage of the L Stance that allows the fighter to through front push kicks that blend from things like Muay Thai but executing the kicks with less hip usage than their Thai predecessors. The reliance of shifting weight between the feet, and the unsupported front foot may open fighters to a front leg sweep as part of your attack. Whereas karate fighters can be more rigid in their attacks and foot movement, kickboxers tend to borrow foot work from boxing, bouncing on the balls of the feet.

Again, these are the rigid forms and they are classical interpretations of the arts, individuals add their own twist to their stance and their body type. This is how we evolve as martial artists. From my own journey I tend o try and blend the two, dependent on who I am fighting. For example, I tend to use the front kick as a strike attack as in karate, as opposed to a push attack, as due to the boxing techniques a use, I don’t want to push my opponent away. I want them where is can rain down blow after blow.

A final note here, is how indeed we move and transition in stance, if we are thinking about the above. When we have delivered a technique, we return to the defensive position, so that our opponent does not have chance to attack our open areas. So, the delineated differences between right and left stance should be clear, and at no point should we find ourselves in no stance, as this promotes off balance and unready.

In summary, I hope this has given you small view into the world of how and where you should put your feet, to make you a better fighter. I’ve added some resources to the bottom that may help you learn more. And of course, ask if you have any questions.