Black - What does it mean to 'be' a black belt?

Black - What does it mean to 'be' a black belt? 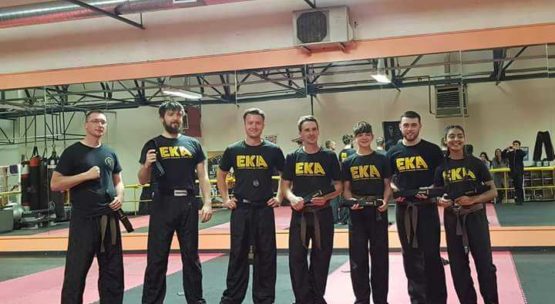 The Japanese word for 1st dan is Shodan1, which means simply “Beginning degree”. It is the reward that comes at the end of a flexible period of training and learning, both physically and mentally. It is awarded to those who have not given up, who have studied, stretched, sweated, beaten and been humbled by those that are more proficient than them. It is the teaching of the practice to someone who is less experienced in a nurturing way. It is to act as almost as a brother/sister to those who need your help and strive to reach the same standards.

But it is more than this, the black belt is a badge of honour which you should wear with pride, keep safe on a shelf, but not allow to gather dust.

Those gradings for 1st dan teach us more than just the required standard about the individuals. They teach about: a young man who refuses to give up and get back in the ring, a far-flung brother who chooses to earn his grade with old friends, a father who wants to build a life for his progeny that are here now and that are to come, a young woman who defies her size to step into the ring and into a cage to prove her skill, an older wolf whose skill can bring blood from a larger opponent. An IT professional who programmes and crafts by day and become all things critical when he puts on his gloves, a fearsome tattooed lady who dreaded the fight but grew to love it, a man of words an letters who proves that music is not his only passion, a mother who was one of the first who uses her skills and knowledge to train the black belts of tomorrow, those who should struggle for breath but always find the wind to kick that little bit higher and punch that little bit harder, a son who has set his mind to future dans and brings his father on his journey and all those people that have trodden the path longer ago and to the future that comes.

Yes! the 1st dan is a beginning degree, but it is a gateway to a future that will take every person on a different road with places and events to come, but with a shared community amongst their peers and a shared language of martial arts.